Right Where I Belong

I have to write this down so I don't forget. Today I was getting down on myself a little, not feeling "enough". I was trying to remind myself of God's promised blessings, and trying to have faith that everything will work out exactly as it should, but my fear of messing everything all up was pretty strong.

My roommate Carrie took time to talk me through all of it while rubbing my back. She asked me questions, and she followed the Spirit to let me know exactly what I needed to hear. I won't go into all the details of what she said, but she let me know they both feel strongly that being here with me is exactly where they are supposed to be at this time. Because Heavenly Father loves me and knows I need them as friends.

My faith was strengthened that God does have a plan for us. That He uproots your plans in order for you to help others, and uproots other people's plans in order for them to help you. Sometimes He moves mountains, and sometimes He moves people away from their mountain home to help you when you are very much in need of what they have to offer. He cares about each of us - you - me - individually, and will guide us along His path, and even provide the fellow travelers we need at each stage of the journey. When we travel with Him, we can't mess up our life's path beyond His ability to fix it.

It is one of my favorite feelings in life, when the Spirit confirms that at this moment, I'm right where I belong.
Posted by Aliandria at 11:06 PM 2 comments: 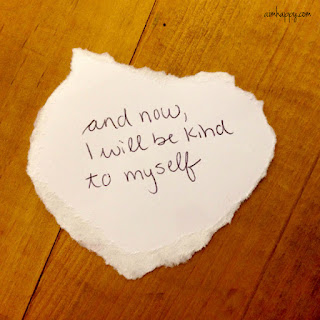 So, September didn't go as planned, hobby-wise. My original plan was to do GarageBand. I have an online course for it and everything. But it was for the computer version, and I only have the iPad version, so it didn't quite match up. And admittedly, when I'm done with work at the end of the day, I don't necessarily have the desire to do GarageBand stuff. Yet.

The good news is that a few other aspects of life got some more attention. I got up at 6:30am and exercised almost every single week day this month! Hooray for having a roommate who exercises with me; we hold each other accountable. I don't always work out at full capacity, but for me the goal right now is consistency. And that is going very well. =)

Another thing I've accomplished is finishing the Self Compassion class. And it was awesome. The thing that blew my mind the most was that our Self Critic is always trying to protect us - it just does it in a very misguided way. But it's not evil. So we can thank it for trying to protect us, then show it a better way. It's odd, because the self-critic and the self-compassionate self often have the same goals for us, but go about it in a completely different way.

For example, losing weight. My self-critic wants me to lose weight because it knows how much I value social connection, and it thinks that being over a certain weight will hurt my ability or make me unworthy to connect with others. My self-compassionate self wants me to lose weight in order to be happier and healthier, with the ability to do awesome and energetic things without getting tired. It does know that being a little thinner will also help me feel more comfortable socially, whether it should or not. But it motivates me by telling me it loves me and that these changes should be made in order for my greater future happiness. The self-critic tells me to make changes out of fear that I'll be unworthy of connection if I don't. Completely different angles.

Anyway, on a not-purposely-related note, I think I've chosen my October hobby, which will be dancing! I'm inspired by one of my clients who loves to do hip-hop dancing and shows me some great moves each week. Also, I just feel like it would be healthy both physically and emotionally to get my groove on. I may start by practicing alone at home, but maybe I'll be able to use my new skills in the real world. =) I know I'm thoroughly white and awkward at dancing, but perhaps I'll get up to Napoleon status.


Other great things have happened this month, including connecting more with old friends, new friends, roommates, and family. I've made some courageous choices in the face of terrifying vulnerability. I've also had my heart softened a bit, and am feeling spiritually renewed. I feel I've become a happier person each month this year. I know most people seem to be looking at 2016 like a horrible nightmare, but for me, it has been a healing, exciting, and comforting year. I'm loving it.

To sum up, September was a great month, in which I've grown quite a lot (in self-kindness, discipline, and courage), and I'm excited for what the future holds!
Posted by Aliandria at 9:16 PM No comments: